After stepping off the cliff, the first tarot archetype the Fool encounters is the Magician.

Through the Magician archetype, we learn that we are co-creating our life experiences in collaboration with the elements of the universe (earth, air, water, fire). The Magician teaches us to harness the energy from the celestial realm to create matter on the physical plane. Many spiritualists refer to this process of co-creation as manifestation.

The teachings provided by the Magician archetype are enticing, which is why the law of attraction is so widely marketed. However, the invitation to create the life we desire implies that anything we want is simply a few positive thoughts away. As such, many walk away from the Magician thinking that they can set an intention toward receiving a large sum of cash, or a relationship, for example, and presto!

However, the Magician is referred to by some readers as a trickster. Although I believe this assessment to be a tad heavy-handed, I agree that the actual teaching of the Magician is intentionally veiled. This archetype provides us with genuinely fantastic and provocative teachings yet leaves us to uncover the subtle caveats on our own. Many of us who created vision boards or the like can attest that manifestation is not as simple as it sounds. It requires more than visualization and journaling.

My Experience with the Law of Attraction

The law of attraction definitely seduced me at the start of my spiritual journey. I spent countless hours searching the internet and magazines for the perfect images to include on my vision board. Then, each year, I would sit down to visually display my desires, and at the end of the year, I would assess the results. Unfortunately, my yearly analysis revealed that only about 60% of my vision board became a reality.

I always wondered why I was unable to manifest all of my desires?

For years, I tried different approaches to achieve the intentions that eluded me. I chose larger images and meditated more deliberately. One year, I even placed crystals around my vision board. I did anything offered as a suggestion for increasing results, yet the outcome was always the same.

Sometime near the release of the movie A Wrinkle in Time, I saw an interview with the cast: Oprah Winfrey, Reese Witherspoon, and Mindy Kaling. At the start of the interview, the interviewer informed Oprah that she was on her vision board, and Oprah responded with kind and thoughtful Oprah words. The interviewer then asked the three panelists if they made vision boards. Mindy and Reese responded affirmatively, but Oprah stated that she didn’t need to create a vision board to draw in her intentions and desires. (I am paraphrasing, of course.)

Oprah’s response bounced around in my head for several minutes. I wondered about her intention-setting process. Did she journal or meditate on her desires instead? Did she use some advanced visualization processes? Oprah has been very open about her deep admiration for spiritual work. She has interviewed some of the greatest spiritual teachers in the world. So, I concluded that her level of proficiency far exceeded my own, and it made perfect sense that she would no longer require a vision board to manifest. I loved that for her. As for me, I still hadn’t mastered obtaining 100% of my intentions, so I continued to create vision boards.

My Last Vision Board

In 2019, I spent yet another holiday season in the hospital after discovering that my father was experiencing kidney failure. I spent almost three months in Texas with him and returned home in late February 2020. A week after being home, I realized that I hadn’t made my 2020 vision board and set a plan to create it the following day. This vision board included brand new intentions and a handful of “old faithful” items (the ones I include every year and never manifested).

One morning in April, I woke up to a voice. It was my spiritual team. They said, “take down your vision board.” I was so confused by this request that I tried to convince myself that I must have misheard. Why would I take down my vision board? I just put it up. But, as always, my spiritual guides were persistent.

So, I got out of my bed and walked to the bedroom wall that displayed my board. I pulled the board off the wall, held it in my hands, and waited. The next message directed me to take the images off the board. Still very confused, I obediently sat on the floor and began to remove the pictures one by one. It didn’t take long for me to see the lesson in this exercise.

It had only been two months since the creation of the board, but I immediately noticed that the first two images I pulled off had already manifested in my life. Of course, this made me smile.

However, the third image I reached for was an “old faithful” photo. This photo had been included on my board in some form for over ten years. This iteration was an image of a big, beautiful home with a circular driveway. After removing the image, I stopped and stared at it. My eyes fixed on the circular driveway, and my thoughts drifted to my mom. My mom loved this driveway style. Whenever we passed a house with one, she would swoon. But, honestly, I never really got the appeal.

At that moment, it became clear why I had never manifested a luxury home. The answer was so simple. I never wanted it. My environment conditioned me to believe that owning a luxury home was universally desirable and a sign of success, even though it was never something I genuinely desired. This line of thinking led to my ah-ha moment.

The Law of Attraction: From the Heart

I quickly scanned my memory of all the vision boards I made over the last decade. I mentally sorted through all the images that manifested in my life and those that did not to validate my hypothesis. It checked out. I realized that everything I have ever actually manifested, I wanted from my heart. My ego desired everything that eluded me.

My ego wanted a big house and a fancy car. It wanted status and envy. My ego wanted to prove to everyone that I made it.

But, what did my heart want?

My heart desired a tiny home on a large plot of land for a garden. It wanted more time to read for pleasure and enjoy the sights and sounds of nature. My heart desired ease and rest. It yearned for laughter and community.

I suddenly realized why Oprah didn’t need a vision board. She had already discovered that when you project the desires of your heart, there is no need to spend time clipping and pasting. Instead, you simply need to make room because your intentions are on their way!

The Magician introduces us to this universal truth, but the remaining archetypes we encounter on this journey through the Major Arcana will teach us the specifics.

“Without the spiritual world, the material world is a disheartening enigma.” 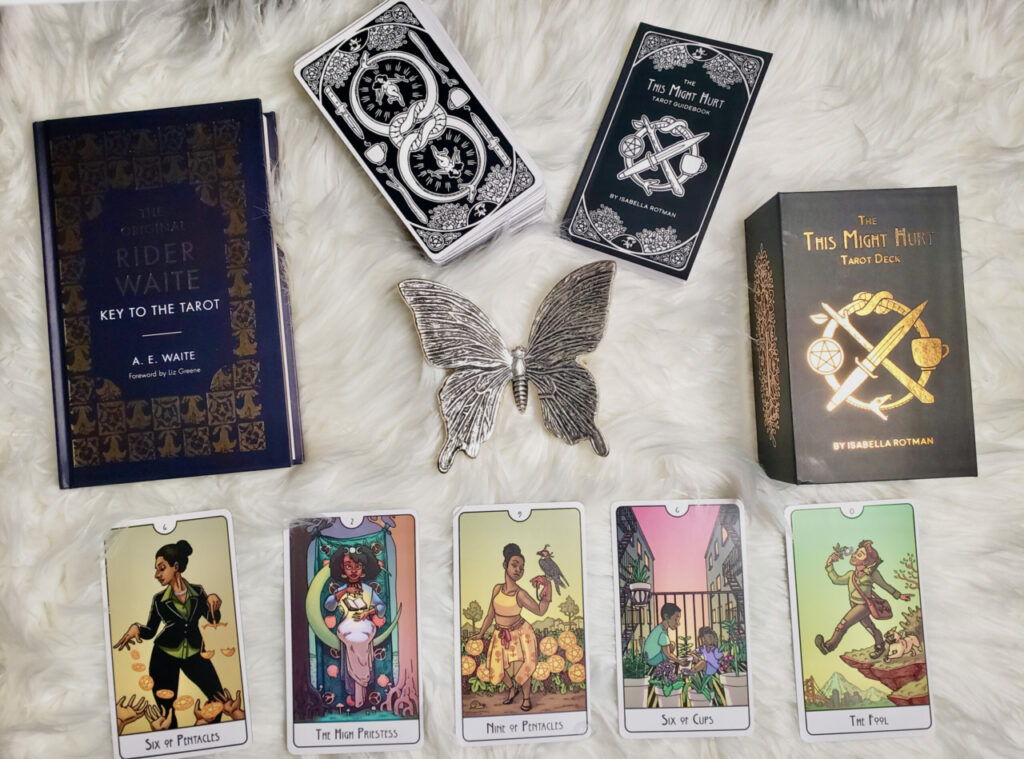 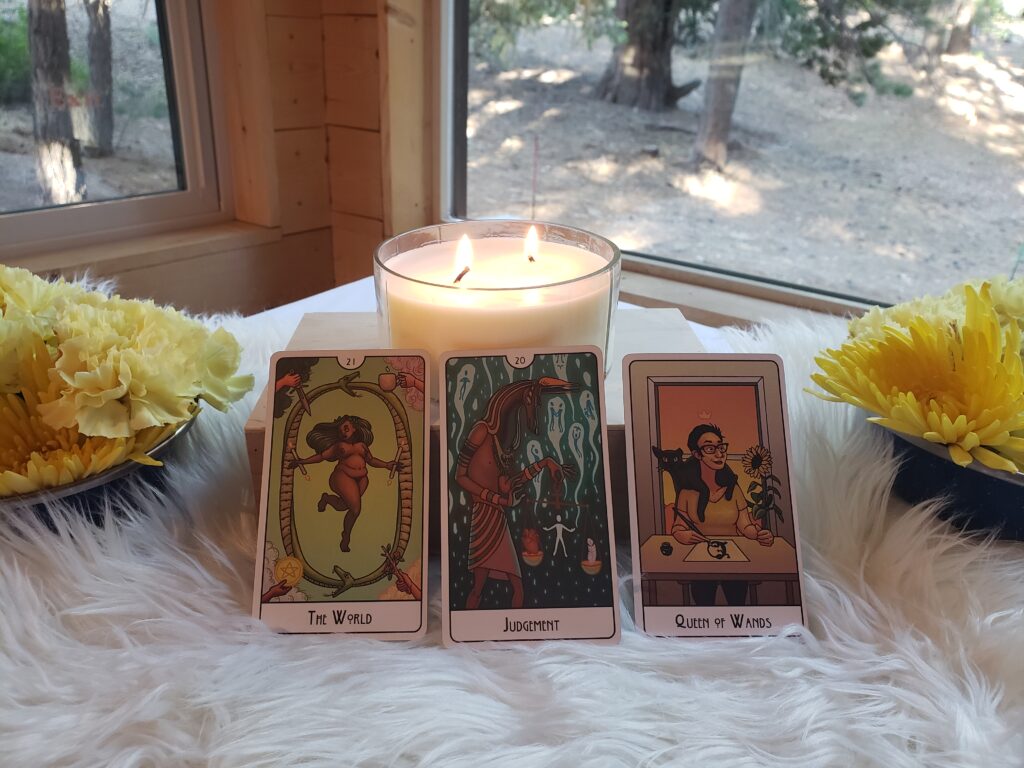 2 thoughts on “The Magician: Spiritual Alchemist”